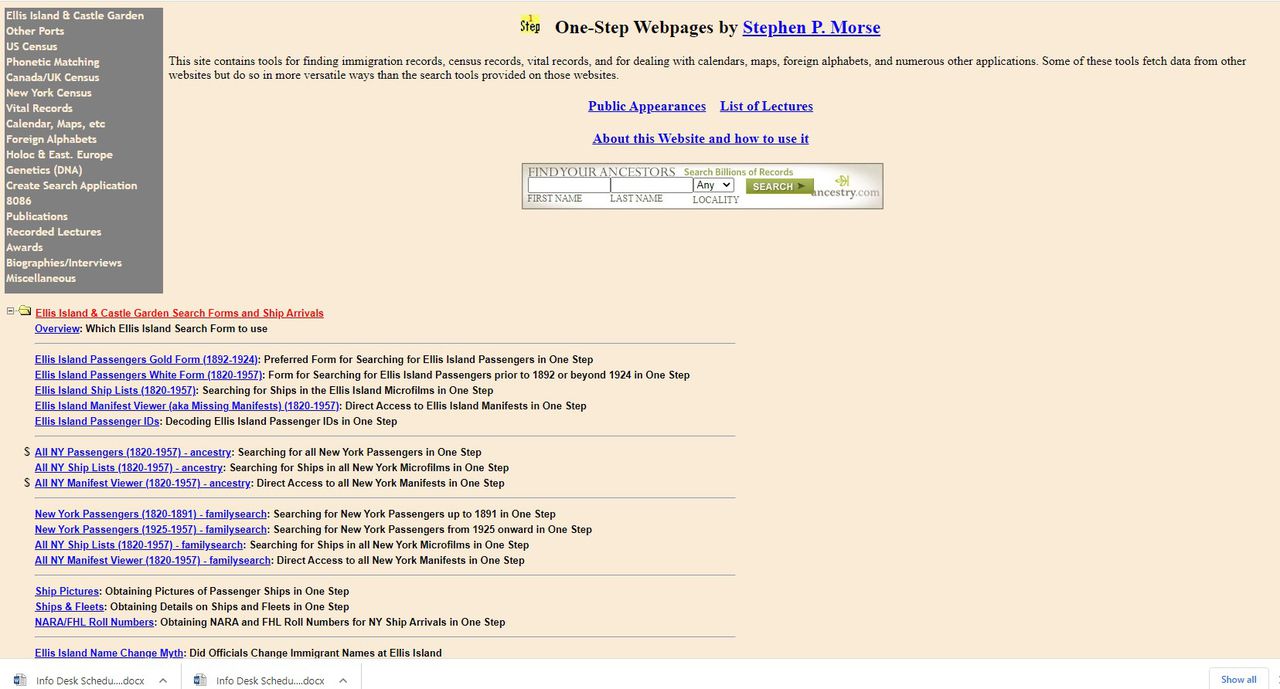 One website that should be on every genealogist’s bookmark list is the Steve Morse One-Step Web Pages (you can find it at www.stevemorse.org – not to be confused with stevemorse.com, which is the site of rock guitarist Steve Morse). This site has been of great help in my genealogical career and in my career as a librarian. I know it can be of great help to all of you as well.

One Step Web Pages is a list of must-have search engines and apps for doing genealogical research. And they are free! Well, using Morse’s search engine is free, but if you want to search Ancestry for immigration or census records, you need to have an Ancestry membership.

Other search engines on the page will scan immigration records from New York (both Ellis Island and Castle Garden), Baltimore, Boston, Galveston New Orleans, and other ports for immigration records. Every US census can be viewed as well as the New York City Vital Statistics Indexes from a variety of sources.

Morse himself had an interesting life. Prior to his genealogical efforts, he worked for Intel, where he became the “father of the 8086 chip”, the processor that helped revolutionize the personal computer. Morse then put his incredible programming skills to the service of creating his one-step web pages and is already planning to release the 1950 U.S. Census next year. He is also a popular speaker for genealogy clubs and conferences.

Indeed, Morse and his programming partner Joel Weintraub have already added enumeration districts for the 1950 census in his Unified Census ED Finder. This is how it works:

When the 1950 census is released next year, there will not immediately be an index for it. But if you know where your loved ones lived, you can enter the state, county, city, address, and street name where they lived. From the drop-down menus you can choose cross and side streets and you will get an enumeration district accordingly. When the census goes public, you can simply go to that enumeration district to find your family, instead of going through pages and pages of scans for an entire city.

A large number of applications on the page are Jewish genealogy research aids: Hebrew and Yiddish translations, Jewish calendar conversions (Muslim and Julian too!), Name transliterators (change of names between English and other alphabets, such as Cyrillic, Arabic, Greek, Chinese, and Japanese). There are also search engines for Auschwitz concentration camp victims and files for Dachau. There is also a lot to play. One of my favorites is the relationship calculator where you can enter a string of relationships between people to find out how you relate. For example, my mother’s mother’s sister’s son’s daughter is my first cousin.

I mean, really, there is so much more I can tell you, but it would just be easier to print an image of the webpage then write the following two words as the column: GO HERE. So go ahead and check it out for yourself. You will not be disappointed.

Danny Klein is Librarian at the New Jersey Hall of the Jersey City Free Public Library and a founding member of the Hudson County Genealogical and Historical Society. He can be contacted at [email protected] or @HudsonGenealogy on Twitter.