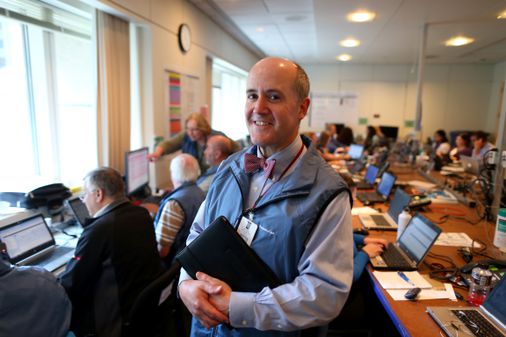 Although this is a big change for employees, the new system will initially make little difference to what patients experience in the hospital. Ultimately, however, this will allow patients to have better online access to their medical information. And it has the potential to reduce medical errors. Instead of a separate record at each Partners facility, a patient will have a record across the Partners system, so information is more easily shared between physicians.

The investment is part of a bet by Partners and the US healthcare system that spending huge sums on information technology will pay off in better healthcare at lower cost. Hospitals nationwide are investing billions dollars in electronic medical record systems, pushed by the Obama administration and insurers, who embrace payment systems that require careful coordination of medical services.

The costs of technology upgrades will eventually be passed on to consumers through health insurance premiums and to taxpayers, who subsidize Medicare and Medicaid, government health care programs for the elderly and the poor, said Dr Paul Hattis, professor at Tufts University. School of Medicine and member of the State Health Policy Commission, which oversees medical expenses.

â€œWe will all end up paying for it,â€ Hattis said. â€œWill we receive dividends in terms of better care and efficiency? We do not know yet.

Other Massachusetts hospitals have recently adopted similar systems, although Partners’s is much larger given the larger network size.

Partners’ new technology will replace a patchwork of dozens of software used by different hospitals, departments and clinics in the Partners network. The medley of software has made it difficult for physicians at one Partner facility to view information about their patients’ visits to other Partner facilities. Even critical information like drug allergies can be easy to miss.

Partner officials promise that the new system will give doctors, nurses and clinical staff across the network easy access to the latest patient information.

The partners are also creating a web portal to allow patients to check their medical information, make appointments and interact with caregivers in a way, such as through questionnaires, that was not possible with healthcare providers. old systems.

â€œIt’s fair for people to think, ‘Is this how we should be spending our health care dollars?’ Said Dr Gregg S. Meyer, Clinical Director at Partners.

This weekend’s launch, which hospital officials dubbed “the big bang,” included the Brigham Hospital campus, Partners’ Faulkner, its clinical partner, the Dana-Farber Cancer Institute and the Division of Home care from Partners. The new technology will be rolled out across the rest of the partner network, the largest in the state, until 2017. It is slated to launch at Massachusetts General Hospital next April.

The system, developed by Epic Systems Corp. of Verona, Wisconsin, was developed three years ago. It has grown to cost double the original estimate of $ 600 million. The partners hired 600 new employees and hundreds of consultants to work with Epic to build the system, then train thousands of doctors, nurses, medical assistants and other workers in its use.

â€œAt the heart of it all is patient safety,â€ said Dr. Ron M. Walls, Chief Operating Officer of Brigham.

The system, which has been dubbed Partners eCare, will send alerts to doctors when a patient needs a vaccination, colonoscopy or test. This too will make it easier for physicians to analyze patient data.

Dana-Farber, for example, may begin to monitor how patients respond to a certain chemotherapy drug to help determine who should receive that drug in the future.

Dana-Farber and Brigham reinforced their staff over the weekend to help clinicians navigate the system for the first time. More than 1,500 additional staff were on site, including doctors, nurses, technology specialists and various temporary workers.

About 450 software specialists spent the weekend in front of computer screens in a sprawling makeshift command center in Dana-Farber, receiving a constant stream of calls from employees having problems. Most of the issues were minor and expected, including issues connecting to workstations and printing documents, hospital officials said.

Bang struggled a bit to find her way through the system as she struggled with the little problems learning new software, such as finding the right buttons to click. When she became confused, she pointed to one of the support staff patrolling her unit.

â€œThis morning I felt a bit disconnected,â€ she said, â€œbut I think when I get used to it it will become second nature.â€

Brigham, predicting that staff will need time to get used to the system, has reduced the number of patient appointments for the next few days, a change that will cost the hospital an estimated $ 15 million in lost money. income.

Lahey Health of Burlington is spending $ 160 million to install its new Epic health records system, which launched in March.
Boston Medical Center also installed Epic, at a cost of $ 100 million, moving patients to the new system over the past year. BMC and Lahey are both much smaller than Partners.

Another Boston health system, Beth Israel Deaconess Medical Center, has chosen not to purchase a single health records management system for its network. Instead, he created a feature that allows different systems to share information with the click of what CIO Dr. John D. Halamka calls the “magic button.” This approach is much cheaper, he said, noting: “We were able to do it with the budget we have.”